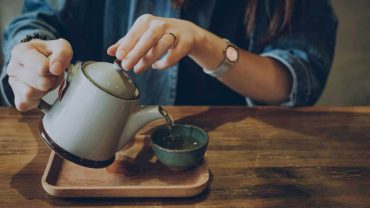 Green tea contains various active compounds – caffeine (the average portion of brewed green tea provides it in an amount of 30-40 mg), but also catechin (on average per 100 mg portion) 1. Of all the polyphenols contained in green tea, the most properties are attributed to epipgallocatechin gallate (EGCG).It constitutes even 1/3 of the dry mass of leaves.It is estimated that this compound is 25 times more potent in its antioxidant action than vitamin E and 100-fold than vitamin C. 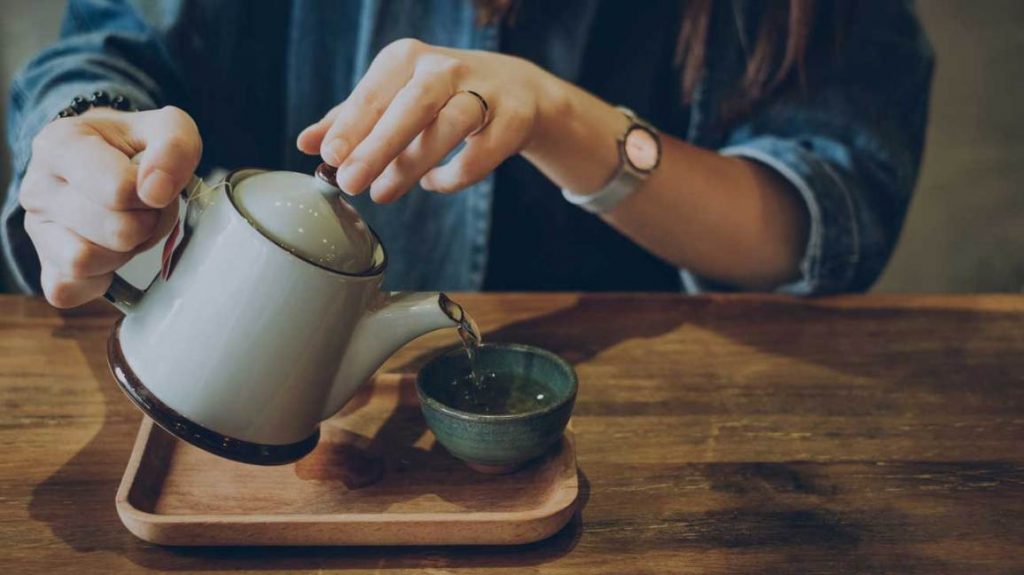 EGCG owes its influence on EGCG fat reduction to the inhibitory effect on the COMT2 enzyme, which is responsible for the breakdown of catecholamines – dopamine, adrenaline and noradrenaline.Of all the catechins of green tea, EGCG shows the strongest influence in this matter.The result is a prolonged time of action of adrenaline and norepinephrine, which increase the oxidation (burning) of fatty acids.

This is what it looks like in theory, but unfortunately in practice, even when combined with EGCG physical exercise, it does not significantly affect the level of burnt fats or carbohydrates in humans.

But what if you combine EGCG with caffeine?Hypothetically there should be synergy, because caffeine inhibits phosphodiestases (enzymes), which in turn results in prolonged action of AMP kinase (cell energy sensor), which increases lipolysis (release of fatty acids from fat cells) 4. In addition, caffeine increases the production of adrenaline and noradrenaline in itself 5. Indeed, this synergy gives the expected results in the oxidation of fatty acids, where a single supply of compounds no longer 6.

A meta-analysis of 15 studies in humans showed the efficacy of combining EGCG with caffeine.580 mg of catechins and 415 mg of caffeine per day for 8-24 weeks were taken by the persons participating in the study.The difference with the group with EGCG alone was sufficient to evaluate such a mixture as effective, where the group using EGCG alone had no effect.

The total supply of caffeine seems to be crucial here, as otherwise the combination of 200 mg of caffeine with 300 mg of EGCG during the day did not allow to get a higher metabolism 10. The supplement was taken one hour before the meal and resulted in increased postprandial oxidation of fatty acids, however the total energy expenditure was not higher than in the placebo group.

What if EGCG combined with physical effort?Maybe then caffeine would be unnecessary?Such a case was also verified in the context of interval training.A dose of 125 mg EGCG is given to fasting people (important, but more on that later), 1 h before exercise, because EGCG need about 75 minutes to achieve high blood concentration since consumption.The result was an increased amount of adrenaline and norepinephrine and clearly higher fatty acid burning.How does this translate into energy consumption?Well, it’s not as colorful anymore, because the resting metabolism increased by 0.01 kcal/min, energy consumption during training by an average of 0.23 kcal/min (60 min in training scale is only 14 kcal) and post-exercise energy consumption increased by 0.03 kcal/min (on a scale of 24 hours it is only 43 kcal).

It is easy to calculate that the training gives about 25% better results in terms of increased energy expenditure for people who only take EGCG with caffeine, so this combination will be the most beneficial.

In theory, antioxidants attenuate the post-exercise regeneration rate, as free oxygen radicals are needed to signal the repair processes of muscle fibers.This is also confirmed by many studies.EGCG is one of the antioxidants.

Unfortunately, there is not much research on this subject, but it is one interesting on rodents, where the supply of EGCG not only did not inhibit regeneration, but even accelerated it!The mice consumed EGCG for a 3-week complex of green tea catechins.It was noted that the control group mice regenerated faster and repeated day after day running, they could run longer and more intensely.The strength that the muscles of mice consuming catechins also generated was higher.

In another case, an experiment was carried out on young women (age range 20-40 years) who were given green tea extract or placebo.These women were doing strength training.Ladies consumed the extract twice a day and each serving contained 160 mg of polyphenols.The experiment lasted 8 weeks.

The group of women consuming green tea extract combined with weight training sessions had lower body fat levels and better strength results (here the most interesting is the result in a 60 kg leg lift in the placebo group vs. 83 kg in the supplementation group).Energy expenditure increased as a result of supplementation and training with an average of 561 kcal, where the training itself increased by 503 kcal, so the difference was small (it is a pity that there was no EGCG + caffeine group).

In conclusion, EGCG seem to combine the benefits of antioxidant consumption and the aspect of athlete regeneration, where it is a certain exception, as antioxidants – although beneficial for health – make post-workout recovery difficult.

Researchers ordered EGCG with caffeine too close to their meals.This results in the formation of certain EGCG compounds with proteins in the non-covalent cross-linking process that causes EGCG to cease to be absorbed and hence used by the body.

In another experiment, researchers also found such limiting effectiveness of EGCG dependence.

Both proteins and the combination of EGCG with caffeine have a thermogenic effect on the body.However, the use of these nutrients closely closes the EGCG effect.A small amount of proteins is enough to disrupt the absorption of EGCG.Polyphenols have affinity for proteins with a high amino acid content of proline.Peptide fractions, such as beta-casein, alpha-lactalbumin, beta lactoglobulin contained in milk proteins are extremely effective in neutralizing EGCG.

Due to the interaction with proteins, it is recommended that EGCG supplementation be consumed at least 1 hour apart from the protein (although in some studies 30 minutes was enough to obtain benefits from the EGCG supply).The best strategy will be the adoption of a sufficiently high dose of EGCG on an empty stomach, after an overnight fast.If with coffee, then without animal milk.EGCG stays up to 6h from intake in high concentration in blood, so for best results it is worth using 2 doses during the day.

How much EGCG should you take?

Already a total amount of 300 mg per day will be enough but you can, for a slightly better performance, raise up to 1200 mg a day.It is worth mentioning, however, that very high doses may cause gastrointestinal complaints, such as nausea, bloating or headache.

The dose of caffeine added to EGCG should be at least 200 mg, assuming that we consume this portion 2 times a day.

As a bonus I will mention in the context of slimming and fight against obesity EGCG in themselves have a positive effect on the sugar metabolism. They activate the P13K enzymatic pathway, which mimic the action of insulin, thereby facilitating the absorption of glucose into muscle cells.I think that this information can be useful to any person with a disturbed sugar economy, such as insulin-resistant people or diabetics.