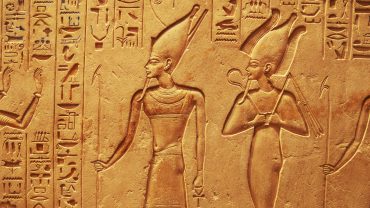 Ancient Egypt is one of the fascinating civilizations in the world. So charming that it inspired many movies, video games, and even books. The things that Egyptians left us are more useful then you might think. Did you ever consider we wouldn’t have electricity if it weren’t for them? Not only that, but the pyramids have more secrets and mysteries for us to research and try to understand.

1. We have the 365-days calendar because of Egyptians

The 365-days calendar, as we know, is an Egyptian invention. How did they get to the conclusion they needed such an extensive schedule? They required precise timing to protect themselves and their houses. They needed to predict the yearly floodings of the Nile river.

2. The oldest dress in the world was found here

Can you imagine a 5000 years old dress? We all know that Egypt was the home of the hottest women in the world, but to see one of the dresses they have worn in that period is fascinating. I guess fashion was a big thing for women even in that period.

3. Slaves did not build the pyramids

Everyone thinks slaves built the pyramids, but the reality is profoundly different. The society of Egypt was more alike the democratic estate we know and love. The people who were working on the pyramids were paid workers, that even had a syndicate. They were more democratic than we think. They could plan a strike without having to worry about losing their job, and they were fairly paid, not to say fed. At first glance, they have more rights than many of the contemporary workers from some parts of the world.

4. Cairo is the jeweler city of Africa and the Middle East

For Africa, Cairo is the biggest city on the continent due to its population, 22 million, and surface: 500 square km. For the Middle East, things are the same: Cairo is a famous city.

5. Every town had its favorite god

Ancient times meant many gods, and every city used to have one as their symbol. The religion was essential during Ancient times, so Egyptians had a god for almost everything.

6. The official language is Arabic

Although the country is situated in Africa, the influence of the Middle East can be seen in the language the Egyptians speak. Arabic is everywhere, but citizens of Egypt can sometimes understand French or English.

7. Egypt has almost half of the year sunny time

Aswan is the third sunniest place in the world: imagine 10 hours of sun per day! Egyptians enjoy 3451 hours of sun every year.

8. Many legends are used for marketing today

Ancient Egypt legends have inspired a number of slots, extremely popular in online casinos, such as Unibet. You can find a whole series of Ra, Book of Dead, and long lost treasures themed games.

9. Mummification was the way to live your after-life forever

After-life was so crucial to Egyptians that they believed that preserving the body of the dead, he or she could live his/her after-life forever.

10. Make-up was essential to people

Like women think today, nobody would go out of the house with no make-up. Both men and women wear it, and we still love the black style make-up we now call “cat-eye make-up.” Egyptians believed that make-up was offering sun protection and healing powers for the body.

Ancient Egypt has many legends and myths to offer, but hieroglyphs are so elaborate that scientists haven’t figured out all 700 signs. So we still have things to decipher, discover, and understand!

12. Pyramids are tombs, not castles

The monuments we all admire were not built for pharaohs to live in, but to be buried. The pharaohs and their families were buried in the pyramids. This is the reason behind the 130 pyramids that have been discovered on the land of Egypt.